Worlds of Ultima: The Savage Empire

Worlds of Ultima: The Savage Empire is the seventh game in the series (not the main series itself, but the whole Ultima saga) and the first of the two parts of the Worlds of Ultima saga. It was published and released in 1990 by Origin for the IBM-PC. A Japanese port for the SNES followed in 1993.

Origin had spent so much money developing the engine for Ultima VI, they decided to reuse it for additional games. The basis for both Worlds of Ultima games made was that the Avatar's Orb of the Moons allows him to travel to other worlds and times, having fantastic adventures. This was the first Ultima game to have in-game cutscenes for several events, instead of just the opening and ending cut screen found in previous Ultima games. The Origin FX-Engine was utilized for this.

The Avatar is transported to the otherworldly Valley of Eodon, a large jungle-like world filled with various tribes (inspired partially from The Lost World), after an experiment of Dr. Rafkin with the Orb of the Moons goes wrong.

These tribes have been magically drawn from varying periods and locations in history, such as the aboriginal nations of Mesoamerica and tropical Africa, originally as labor for a species of intelligent reptiles called Sakkhra which once dominated there. The whole place is under attack from the ant-like Myrmidex, which were brought in to replace the humans for labor but got out of control. The main plot involves getting all thirteen tribes to join in an alliance against the Myrmidex. All but one tribe has its own demands before joining, ranging from defeating a T-Rex to recovering their holy statue.

It turns out that this strange mixture of worlds was created by a huge corrupted moonstone, which has to be destroyed to prevent it collapsing due to instability. The valley of Eodon is actually on Earth, but the moonstone has made it inaccessible and unmappable. Dr. Rafkin first puts forth this hypothesis, which is later confirmed by a Xorinite Wisp.

The Savage Empire uses the same engine as Ultima VI.

Beside the primary PC port, there also exists a port for the Super Famicom.

This port was only released for the Super Famicom system in Japan. It is extremely rare to locate, even within Japan, and retails for a high price in Japanese used electronics stores. The game uses an engine similar to Ultima VII for the SNES. It has never been released in English and while ROM images are available there have been no successful attempts to translate the ROM to English. The game comes complete with a much abbreviated version of the PC manual and contains no map. For more details see SNES-Port of Savage Empire.

Included with the release of the game were these things:

There are no known upgrades for the game available. 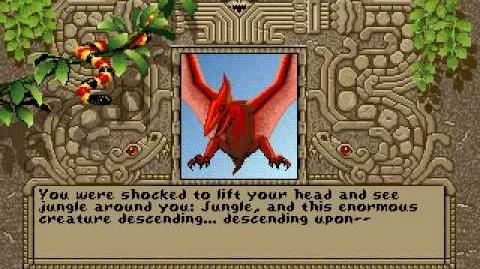