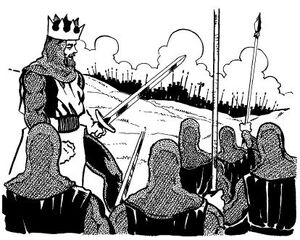 The War of Imbalance was a time of vast destruction in the lands of Serpent Isle, which lasted for around 300 years.[1]

The war was brought by the imbalance that was created in the Serpent Isle when Exodus abducted the Great Earth Serpent. The Order Serpent and the Chaos Serpent began fighting with no one to balance them. The imbalance affected the followers of Order and the followers of Chaos, which became obsessed with fighting, each side vying for supremacy, whereas always before they had co-existed peacefully.[2] The Great Hierophant of Balance, Ssithnos, was weakened by the disappearance of the Great Earth Serpent, and was unable to restore Balance to the land.

The war started when Ssithnos was murdered, after Order forces stormed his keep. The Order forces blamed the Chaos forces for the murder, sparking the war. What followed was a conflict the like of which neither side would achieve victory in. The Order forces were commanded by the Order Hierophant Calithiss. Her forces, soon after the death of Ssithnos, stormed the Chaos city of Skullcrusher and killed its inhabitants. They later killed the last Chaos Hierophant in the Temple of Enthusiasm.

Although the war was at first fairly even, the Order armies managed to tip the balance in their favour ten years into the war with the creation of the Automaton warriors, mechanical men who needed no food or rest.[3] Against such an enemy, Chaos was hard pressed to defend.

Eventually, the forces of Order had their ultimate triumph over Chaos, as they bound the Chaos Serpent, and tore it into three parts, which became the Banes of Chaos. These beings were sealed away in specially crafted prisons in the Order shrine which opposed their untwisted counterpart.

Having seemingly won, Order's victory was short-lived, as without either the Great Earth Serpent or the Chaos Serpent to balance it, the Order Serpent began to go insane within the Void, withdrawing its guidance from the remaining Ophidians, as it writhed mindlessly, alone. The followers of Order thus left the Serpent Isle to a place unknown through the Wall of Lights.

During the quest for the Silver Seed in Ultima VII Part Two: The Silver Seed, the Avatar travels back to a point several hundred years before the events of Ultima VII Part Two: Serpent Isle, around fifteen years after the start of the war.[4] At this stage, the fortress of Serpent's Fang, a bastion of Order, doesn't play much importance in the war.