Vesper is a village located some distance south of the Shrine of Sacrifice and on the shore of the Great Sea. The town was settled twice, both of which were destroyed. It was first colonized during the founding of Britannia then abandoned after a severe drought transformed the surrounding region into a desert, thus creating the Drylands. It was resettled as an industrial mining town many years later by both humans and gargoyles, but presumed destroyed during the Great Cataclysm accompanying the rise of the columns.

The town of Vesper was originally founded between Ultima III and Ultima IV. At that time the surrounding region was green and fertile. Vesper was a small village with a single large structure containing all its shops and most of its citizenry. It was one of two locations in Britannia sporting a guild shop (the other being Buccaneer's Den). Some time following Ultima IV the region experienced a severe drought and the inhabitants of Vesper abandoned the town for other parts of the world. During Ultima V and Ultima VI no visible structures remained of the town, however the gargoyle Sin'Vraal took up residence at the village's former site.

By Ultima VII, both humans and gargoyles had resettled Vesper. The largest employer in the town was the Britannian Mining Company (BMC), who sustained the town by extracting ore from the nearby Vesper Mines. Despite the town's resurgence there was a significant and growing class disparity, at both social and economic levels, between the two races. The humans and gargoyles were segregated into east and west sections of the town, respectively, on either side of the oasis and each with their own inn. The humans were the richer of the two classes, and held the positions responsible for governing the town or overseeing the operations of the BMC. Most gargoyles however were laborers in the mine. These racial tensions incited mistrust and hatred between the two sides with some gargoyles becoming violent against humans (Anmanivas and Foranamo for example) and some humans forming the Britannian Purity League to "cleanse" the town of gargoyles. Many residents from both sides believed that violence would not only be the ultimate outcome of this disparity, but that it was also their only solution to the problem.

In Ultima IX, both Vesper and the Drylands no longer exist. While no definitive reason for this was given, it can be assumed that it was destroyed during the Great Cataclysm that followed the appearance of the Guardian's columns which resulted in many geographical changes to Britannia.

Vesper also exists in Ultima Online as a major sea port. It has a wide variety of shops largely due to the crafts originating from Minoc, which is in close proximity. Most of the city is divided by a series of canals into a collection of sixteen islands, all interconnected by stone bridges. Due to all the stone work, Vesper has a reputation for being a beautiful city. 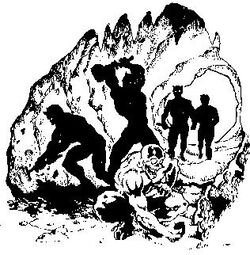 The Towne of Vesper, found in the northeastern part of our fair land just to the south of the inland lake, provides a welcome respite for the weary traveller. Its many inhabitants are quite congenial and well-versed in the lore of Britannia and in the ways of the seekers on the path of the Avatar.

- from The Way of the Avatar (Ultima IV)

Located on the edge of the desert in northeast Britannia, Vesper is an industrial town. Here the main branch of the Britannian Mining Company is located. Vesper is one of the few places in Britannia where humans and gargoyles live together in an approximately equal number.

Vesper is located on the eastern coast of Britannia, the northernmost city on said coast. Its positioning almost makes it more a part of the culture of the Feudal Lords or Magincia, as it serves as a major trade port for the north part of the sea. Vesper is a city of shallow waterways and canals. These canals are largely man-made, but are rough-hewn and seem quasi-natural. Although the climate in this region ranges from the temperate to the cold, Vesper is a city of strong stonework and wide open spaces that serve as breezeways. The stonework is all done by local artists and artisans and has earned Vesper a reputation as a beautiful city.