Back to page
Add topic

Please STOP plastering the wiki with a mass of stubs! This is very bad style! Please write whole articles instead of doing that!

So is a million red links. Take your pick as to which is worse. I'll be going back to those articles and writing them soon enough. Relax. JubalHarshaw 15:58, 2 February 2007 (UTC)

Could you please move al that cheating, get-itme etc.-stuff into a cheating subcategory? Otherwise it will really clutter the Other Things-category, and looks more neat, since it is a topic on itself.

Ahem, while I think that the "image needed" thing is a good idea, please don't stick it to in-game items, that were never seen as more than being a few pixles big. A picture would be really useless in these cases. As well as for the Avatar, since he/she has many different faces.

Actually, why not images for the different faces of the Avatar? Also, chances are I will tag most any in-game item, if you feel it doesn't warrant a picture, just pull the tag, maybe let me know on the article talk page that the item isn't large enough, etc so I don't re-tag it. You probably have far more knowledge of in-game items than I. As I notice you've done most of the image uploading, I'm just trying to give you an easy way to see what might still need an image. JubalHarshaw 15:26, 16 February 2007 (UTC)

You know how many different Avatar pictures exist? Alone Ultima VI, VII and VII/2 have at least 20. So that would be a bit difficult...

For other people in Ultima VI, VII and VII/2, who you can talk with and have no picture, you can tag them, since it upload these later then.

I'm curious: where is it noted in Ultima that Horance was an apprentice of Flain?

Can't remember where I got it...sorry, but I got that from memory, and don't know from where exactly anymore.

Hm. I'm dubious if it's correct, as I couldn't find anything to verify it and it doesn't 'feel' right. *shrug*

I checked the U5, U6 and U7 transcripts, and did an Internet search as well. The only mention of this I could find was from the Ultima IX Redemption website. I believe it may just be something they were using for their continuity, and is not official.

Thanks for checking my work and adding in what I didn't know! I've decided to stop hitting their talk pages with what I don't know. Instead I'm putting together a list on my user page. Fenyx4 16:18, 5 August 2009 (UTC)

First of all, good job on all the articles you keep churning out. Looks like you've touched more or less every article on this wiki in some fashion! That having been said, I hope I am not out of line in offering a suggestion: when it comes to wikis in general, usage of personal opinion is avoided since a lot of people co-author the articles; one man's personal opinion might differ from another's. So things like judging whether an NPC is annoying or not, or whether the music in a particular game is good or bad is best left to the reader and not included as fact in the wiki.

Thanks for cleaning up my mess. Could you also change the width of my pictures on the Ultima IV ports to 200. They look all out of place. I don't know why my computer is so useless. Dungy 22:03, December 7, 2009 (UTC)

I have seen the image that you uploaded to the virtues page. I have been wanting to get a tattoo of the eight virtues as depicted in that image. I was wondering, where did you scan it in from and do you have it available in any higher resolution? Thanks!

That looks like the image from the Ultima Underworld manual. I'll see if I can get a higher resolution scan for you, as all the ones on the Internet seem to be about the same quality. Browncoat Jayson 15:57, January 18, 2010 (UTC)

Hey, Trib- sorry about continual broken formatting... I don't know what's going on at my end, but I'm rarely actually messing with a page's formatting. I think something gets lost sometimes while switching back and forth between the normal and "Source" views.

If you know of any tips to keep this from happening, I'd appreciate it. Thanks!

While creating a character description for Thindle in Paws, I noticed that his image had not yet been uploaded. I tried doing this myself, but kind of messed up the first time. No idea how to delete the broken picture. Sorry. I also couldn't figure out how to categorize his image under Ultima VI character portraits. How do I do these things? Dungy 21:58, March 1, 2010 (UTC)

Forum:Administrator - Just wanted to bring your attention to this in case it goes scrolling off the recent changes. It'd be nice to have everyone's input. Fenyx4 14:30, March 12, 2010 (UTC)

A million thanks for adding links to the other NPCs for Utima V. I'm just learning how to add content to this WIKI and love Ultima as much as anybody!

Just wanted to say thanks for covering me on a lot of the pictures, especially of the weapons... I have access to Ultima VII/2 but not The Black Gate, which makes screen grabs difficult for some of them!

No problem with the pics. It seems I can deliver the best screenshots of all people here.--Tribun 21:13, April 13, 2010 (UTC)
Tribun, I was wondering if you could make the Ultima Underworld I NPC screenshots a bit bigger. I realize they original had small character portraits, but a different resolution might help. (Dungy 02:43, May 14, 2010 (UTC))

Hey, we're discussing this sort of problem over at the talk page for Musket, but took a screenshot of this because I am not sure what the pictured helm is, and you're the image upload master: 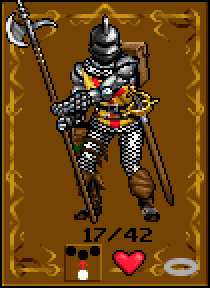 Wow, my bad. Can't believe I missed that. Probably my tendency to ignore scale armour in games since chain is usually better. :) What do you think about doing a separate page just for helms, since they were around in Ultima V too? It'd probably be somewhat like the Shields page. --Polygoncount 18:09, June 8, 2010 (UTC)

Hey, to prevent "revert wars" can you please make sure to include why you choose to revert a page in the edit summary? I know others have asked this of you before as well. The latest example is Valor, where I believe AngusM edited out the description because it was already present word for word in the Lore Quotes, which you reverted without saying why. Thanks. --Warder Dragon 15:23, August 12, 2010 (UTC)

Tribun, it's cool that you're posting all of those scans of the Ultima card-game. I'll admit, I picked up some cards while I was in Japan, but I have absolutely no idea how to play the game or anything about it other than the cards. If you know anything more, please feel free to compose the article. I just got some cards and an advertisement when I bought Ultima Complete. (Dungy 15:32, August 21, 2010 (UTC))

"Christ, use the correct categories" - Tribun If you don't want to get angry, just tell me the correct category, and I'll be more than happy to fix it for you. I don't make mistakes on purpose, but when I make them, let me know, and I'll address it. It beats you losing your temper. (Dungy 15:32, August 21, 2010 (UTC))

Sorry, nothing personal. I just had to do that over that last months so often with various contributors, that my tolenace of it has grown thin. It was an outburst of frustration. Just as a ground rule, if there is an category for an article, pictures never go into it.--Tribun 15:40, August 21, 2010 (UTC)