The Tale of Katrina and the Noble 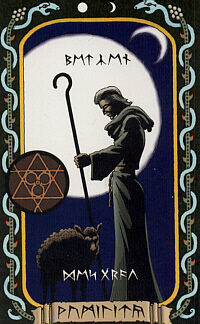 The Tale of Katrina and the Noble: a Parable of Humility was originally featured on the website for Ultima IX, but is no longer available:

Katrina was a shepherdess, and as far as she was concerned, that word provided a complete description with no further need of qualification. She was beautiful, to be sure, and wise as well, and held the respect of both her peers and those above her station. All this, however, had no bearing on the fact which defined Katrina to Katrina herself (and what other opinion mattered?). She was a shepherdess; she tended her sheep.

As it happened, the sheep she tended were not her own property, but belonged to a rich noble of the city of Magincia. In return for her service she was provided with a sturdy hut (kept scrupulously clean), and a regular allotment of both mutton and wool, which she could either reserve for her own use or sell in the marketplace.

I am sure you've heard of the old Magincian nobility, storied as they were for their opulence and splendor. You may be sure no citizen of Magincia would ever condescend to lay a hand on an actual breathing sheep, though they would willingly enough sit down to a hot mutton chop while wearing a fine wool tunic. So Katrina was engaged to see to the unpleasant necessities of the flock's management, and faithfully delivered up to her master the profits of his investment, but her labor.

Alas, the most refined sense of style is no shield against misfortune, as many a great lord has found out. Another noble, an acquaintance of Katrina's patron, had fallen upon hard times, and saw his family fortune wiped out, through a combination of unwise investment and simple ill luck. So this poor fellow resolved to go to his friend, and trade his last and greatest family heirloom - a magnificent emerald, of unmatched size and luster - for half of Katrina's master's flock. Such a purchase should be sufficient to provide both a present income, and the promise of future increase.

So he brought the emerald to Katrina's master, who proved eager to make the trade, for owning such a precious object would bring great honor to his house. And the two nobles went out together to divide the flock. Together, they ascended a platform built for that purpose (for no right-minded noble would ever risk treading in sheep's soil), and began to separate the flock, with Katrina dividing the sheep below at their direction.

At a certain point the bargaining grew heated, and the purchasing noble drew his emerald out of his pouch, and began to discourse on its flawlessness and purity, in an attempt to cajole the other to accede to his wishes. But the fellow's unfortunate luck held true, and while he gestured about, the jewel flew from his hands and down to the floor of the sheepfold, where a half-grown lamb promptly devoured the shiny thing.

Katrina apologized profusely for this indignity (though it was none of her fault). But she assured the men that there would be no cause to suspend their dealings. "I shall watch this imp most carefully," she assured her master, "and when the stone reappears - as it must in a day or two - I shall clean it scrupulously and deliver it up to you myself."

The nobles, however, were both horrified at the thought of their treasure undergoing such an indignity, and said that the plan would never do at all.

"So be it," said Katrina. "If that's your preference I will slaughter the beast today - this very hour - and we'll have the jewel back in your hands presently, though it seems a shame, for I had wanted this lamb as a ram, rather than for mutton."

But the nobles both agreed that this too was an unacceptable pollution, and after some discussion both men agreed that there was nothing for it but to regard the disgraced gem as forever lost to Magincian society. So the poor noble returned home, ruined and sad, but secure in the knowledge that his dignity remained intact.

Katrina, who had long since learned the folly of trying to ascribe sense to the requirements of a Magincian's lordly Pride, bedded her sheep for the night, except for the impertinent young ram which she brought to a special stall, and there she watched him most carefully. In due time the course of nature was accomplished, and the gem reappeared into the daylight. Whereupon Katrina took it up with a spade, and washed it vigorously with lye and good clean water. Then she took it to the port, where she found an honest merchant who cared nothing for the gem's recent history, but only for its weight and luster, and he paid her a most goodly price for it. Some of the money Katrina spent on her own practical comforts, and some she gave freely to those whose need was real, but the most part she put away against mischance or infirmity. And so it came to pass that in her Humility, she became the most honored and prosperous shepherd in the whole city.

The lamb grew up to be a fine ram indeed, and for many years reigned over the flock. He thought himself a very lordly figure, I'll wager, for all that he never knew that he had been, for a time, the richest sheep in all Magincia.

As for the ruined noble, he was soon forced to sell his mansion to pay his debts, and seek the charity of kinfolk, where he received all the affection that is rightly due to a poor relation steeped in self pity. Today his honored name, which he would not besmirch with an honestly soiled fortune, is not remembered by anyone.