Spirituality is one of the Eight Virtues.

Spirituality, founded on all three principles in equal parts, is the concern with one's inner being and how one deals with truth, love, and courage. It is also the awareness of the love that unites one's own inner being to those around one. A centre for rangers, Skara Brae is a city immersed in the study of spirituality.

The shrine of Spirituality is not situated on Britannia. Instead is deep in the Ethereal Void, with access only through a moongate. 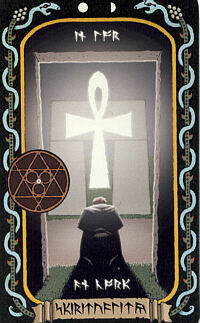 During Blackthorn's tyranny, Spirituality was turned into a law: "Thou shalt enforce the laws of virtue, or thou shalt die as a heretic."

Spirituality through the Ages[]

Meditating at the Shrine of Spirituality will give these insights;

"'Tis now thy sacred Quest to go unto the Codex and learn the neglect of one's Spirit!"

"To forsake one's inner being is to abandon thy hopes for thyself and thy world."

"Throughout this varied and eternal world, soul is the only element. The wealth of the spirit is the only true wealth."

Spirituality is concern with one's inner being, and how one deals with truth, love, and courage.