In the Age of Darkness, magic worked quite differently in comparison to its now-codified rules. The magic wielded in ancient Sosaria was far less versatile; mages were very busy rediscovering the limits of sorcery, since magic had been outlawed in Sosaria for many generations due to a general distrust by the populace. The coming of Mondain forced its return, in the hopes that a knowledge of magic might help to combat the evil wizard. It was an interesting time, before the rules for magic were finally set in Britannia.

At the time of Ultima I, Sosaria was just recovering magic, after it had been banned for a long time; powerful magic users had yet to emerge. Wizards and clerics both practiced the art through their own separate methods. Preparation of spells and casting them from spellbooks wasn't yet the standard, so magic users had to resort to buying single-use spell scrolls, which they then would use for their magic.

Additionally, four objects were available to strengthen the caster's magic powers: Staves, wands, amulets and triangles. The triangle was also a magical sword, usable as a weapon. The wisdom of the caster determined the chance of successfully casting a spell, while intelligence determined how powerful its result would be.

On the time-warped Earth of Ultima II, the division between divine magic and arcane magic grew larger, with wizards practicing arcane magic and clerics divine magic. The same rules for wisdom and intelligence applied, yet the use of magic itself was much more limited. While purchased scrolls were still a necessity, only three of the nine spells could be used by both classes. Three of the spells were purely divine, and three purely arcane in nature.

For whatever reasons—perhaps the warped nature of time and space in this part of Sosaria's past—spells could only be cast in the various dungeons and towers, making the formidable power of magic users next to useless on the surface world. 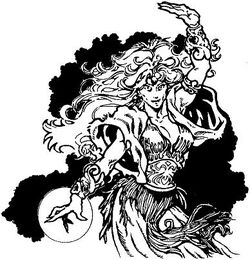 In the time of Exodus in Ultima III, the division between arcane magic and divine magic in Sosaria was complete, with various specialty classes practicing either one or the other form of magic. Scrolls no longer had to be bought. Casters knew their spells from memory, and only the amount of mana available limited their level of power and frequency of use. Divine magic relied on wisdom about the world that surrounds the castle, while arcane magic relied on intelligence to understand the concept and theories behind magic.

In these times, the Cult of Runes represented the arcane side of magic, while the Cult of Truth represented the divine aspect. Both sides had their own unique set of 16 spells, which were further divided into 10 basic and 6 advanced spells. Both cults tried to make the workings of their spells a secret to outsiders, by giving them names that were not of the common tongue.

Both forms of magic required different words of power (in the form of phrases unique to each spell), and some had extremely rare and exotic components (even compared to Nightshade or Mandrake Root!) needed to bring about their effects. Very little of these old ways survived the transition into the Age of Enlightenment.

The available spells were:

This was the last age in which magic was under experimentation. With the establishment of Britannia, the ways of magic were streamlined, and Britannian Magic replaced all the other systems of magic.

A mentioned elsewhere in this manuscript, the practice of magic had once died out in Sosaria. The power of the mystic tradition proved too corrupting for the general populace and the lords of the land decreed that all who dabbled in sorcery were to be banished. 'Twas not until the coming of Mondain the wicked that our scholars once again unearthed the dusty tomes that contained the records of the once flourishing arcane arts, and set about to retrain adepts in the use of enchantments. Our leaders realize that once the discipline of magic is reawakened, it shall never again be put to rest. Such is our plight that even the most dreaded of the arts is laid bare to all who will try to learn it and who swear to use its powers to combat the spread of Mondain's vile influence.

While those naturally born to the practice of sorcery, who can invent their own enchantments and forge new ground in the arts, have yet to emerge as powerful wizards in their own right, a certain progress has been made. There are four artifacts available to the budding mage which will enhance the ability to weave enchantments: Staff, Wand, Amulet, and Triangle. The latter is a magical sword that may also serve as a weapon. Several powerful spells, which will cost the buyer in both gold and experience, may be purchased in the magic shoppes of Sosaria.

The use of magic spells is limited by your selection of profession. Only wizards and clerics can cast magic spells. Nine spells fall into three categories. Acquiring spells is simple: you purchase them in appropriate shoppes. Their cost rises with increasing power. Casting a spell uses it up even if it fails, so be sure to have plenty of the spells you like.

Each character, that is allowed magic, has a maximum Magic Point level, which is displayed with the Party statistics. A Cleric with a Wisdom attribute of 25, will have an maximum Magic Point level of 25. If thou art a Ranger whose Intelligence is 15, and whose Wisdom is 10, then thou will be able to only cast second rank, (B), spells. Thy costs a different amount of energy to cast. A character replenishes that energy at a rate of one point per turn on the surface, and one point every four turns in a town or dungeon. Druids regain two points per turn, which is quite an advantage. Initial character races must be chosen carefully, or thy characters may never develop enough mystical force within them to succeed on thy quest.

Having chosen thy companions, and formed a Party, a few last words of advice. The situation on Sosaria is worsening rapidly. The darkness of evil hangs like a pallor over the Lord British's realm.