On Pagan, the story of the Slayer was told to scare children. Said to be a weapon with a mind of its own, it would long for its wielder to spill blood so that it could be fed! However, the Slayer's tale is, in truth, very real. Stored in the old ruins under the East Road near the Cemetery, the weapon waits the opportunity to finally feed again, to again taste the blood of its smitten foes.

The Avatar accidentally stumbled onto the weapon's trail when the hero broke through the ground of an old ruin on the East Road. Following the advice of old books through the ruins under the ground, the Avatar eventually discovered this bloodthirsty mace.

It is unknown what happened to the Slayer after the Avatar left Pagan. 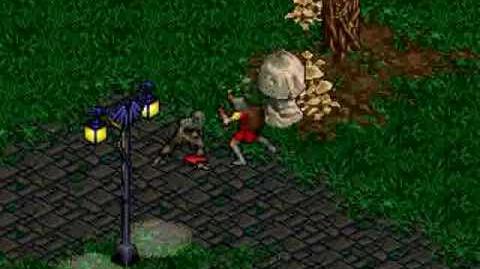 The Slayer in action, with the characteristic death-stroke.

Retrieved from "https://ultima.fandom.com/wiki/Slayer?oldid=61125"
Community content is available under CC-BY-SA unless otherwise noted.