Editable Codex
Register
Don't have an account?
Sign In
Advertisement
in: Creatures, Akalabeth, Ultima I,
and 11 more

Skeletons, the remains of people long dead, reanimated through dark magic. Usually nothing remains of the spirits that once had dwelled within these bones, making them brainless but useful tools for the wizards who summoned them. They can be dangerous foes, but their very nature makes them susceptible to heavy weapons, since one strong hit can shatter them to pieces.

If not aiding a mage, skeletons can usually be found in dungeons, graveyards or near their place of death. They also can suddenly stand up from a pile of bones, surprising the unsuspecting traveler.

Skeletons stayed the same in the whole series, although in Ultima III they were grouped together with ghouls and zombies. In Ultima VIII, skeletons usually were armed with axes, while in Ultima IX, they couldn't be destroyed since they always regenerated. 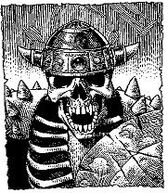 The progeny of Necromancers and undead Liches, Skeletons are the animated corpses of undead warriors from which the flesh hath withered and fallen away. They fight tirelessly in an effort to carry out the bidding of their dark masters.

Animated bones, the Skeletons are the undead incarnations of a variety of creatures. These tools of evil strike fear into ordinary travellers. With the proper enchantment, however, they can be Dispelled.

- from The History of Britannia (Ultima IV)

Perhaps the most common of undead creatures, skeletons lack strength and brains, but they are dextrous and can take a surprising amount of punishment. They often carry some goods.

- from Book of Lore (Ultima V)

The expressionless, hollowed eyes of the skeleton belie the malice that animates the otherwise lifeless latticework of bone and sinew. Conjured up by malcontented mages bent on mischief, these creatures - the restless remains of fallen warriors - are both fearless and tireless in battle.

This is the undead reanimation of a fighter who was slain on the field of battle. Skeletons tend to cluster in hordes and are often following the commands of a sorcerer. In fact, they may continue to do so well after the sorcerer himself is dead!

The undead remains of warriors from ages past, skeletons fight just as well as their living, fleshy counterparts. Until animated, one skeleton appears no different from another, so the wise traveller will always beware when encountering a disinterred pile of bones.

The remains of warriors from ages past, skeletons are the servants of Lithos and the Necromancers who follow him. Their body and spirits, passed to the Mountain King during interment, are held in waiting until needed. However, they still carry with them the accouterments of their fighting days: axes, swords, shields, armor and so forth.

Though dead, these animated skeletons are extremely agile and strong, often felling a man before he can even strike. They are brainless, yet seem to retain much of the fighting skill they possessed in life. Skeletons attack only with their ancient weapons, which are oft times filthy with disease-ridden decay. As they are already dead and serve only a single function, skeleton warriors attack relentlessly until destroyed.

- from The Chronicle of Pagan (Ultima VIII)

There is an axiom of adventuring: it is better to burn the bones of a dead friend than to allow them to return as an undead foe. In a place of evil magic, the ambient malice may reanimate the bones of a friend into the form of a skeletal enemy. The animated bones possess all of the combat skills of their former selves yet none of the Virtue. The exist to serve the simple demands of their masters. Blunt weapons are the best correctives.