Editable Codex
Register
Don't have an account?
Sign In
Advertisement
in: Transportation, Ultima I, Ultima II,
and 11 more

Throughout the ages seafaring has always been prominent in the lands of Sosaria and later on Britannia:

The frigate has long been the ship of choice for adventurers, explorers and pirates alike, allowing sailors to maneuver the realm's oceans with cannons in tow. Frigates were first available in the early days of Sosaria, during the events of Ultima I. In this age, ships could be procured for a little under six-hundred pence and were available throughout the coastal "Transport shoppes" which dotted Sosaria's landscape.

Later, during the incursions of Exodus in Ultima III, such vessels were scarce to come by amongst honest vendors, with the pirates of the era having secured the vast majority of the water ways. In this age and for several years to follow, a frigate could most commonly be procured by fighting against a raiding crew bold enough to attack one's party on shore and then claiming their ship after dispatching them.

A frigate in Ultima I

Sailing on a frigate in Ultima III

It is said that during the altered time line of Terran history created by the sorceress Minax, that cannon-bearing frigates were a common sight throughout all four major time zones accessible through the planet's time doors - with such vessels appearing from the ninth millenia B.C. up through the twenty-second century A.D. Apparently, amongst the sailing culture of this strange alternate world, those who sought passage on any ship required an artifact known as Blue Tassles to prove their mettle to the crew, although precisely what the significance of these tassles were has never been brought to light.

It is assumed that after the enchantress was slain, that history righted itself, and that Earth's rich and varied naval customs and technologies were restored to normalcy.

Ship craft was still in practice during these dark days of high piracy, and it was, in fact, in this very era that the legendary HMS Cape was built—a ship whose speed and power was of such potency that merely equipping a ship with its magic wheel would steel the strength of the mundane vessel's hull. It is said that for generations after this prodigious vessel sailed and sank that its likeness was not matched, owing to the misplacement of its blueprints by its inventor's descendants.

Legends such as the Cape aside, it was not until the days of Blackthorn's regency that shipwrights became a common sight amidst the coastal cities of Britannia. During the age of the Oppression, the mariners of the realm were likely at the apex of their calling—with frigates back on the open market and with the erection of the four manned lighthouses to guide wayward sailors to shore. It was in this period as well that skiffs first became a common piece of equipment on sea-faring vessels, allowing for further exploration of coastal shoals and rivers.

Even after the eventual destruction of lighthouses in the upheaval that followed the Underworld's collapse, frigates continued to be the standard ship for travel for several years. By the time of the events of Ultima VI cannon-equipped vessels were still common, although ships were generally sold without skiffs to accompany them.

Using a frigate in Ultima VI

It was only over the next two-centuries of relative peace that the frigate finally went out of fashion, with armed vessels no longer being common by the time of the Avatar's arrival. It seemed that piracy as it was known had died out in this new age of Britannia, with the once inhospitable settlement of Buccaneer's Den slowly transforming itself around a burgeoning tourist industry, and many raiders retiring from their lives of crime. With the seas now largely free of marauders, it appears that the frigate met its end as well, its armaments rendered unnecessary.

Therefore, the ships changed greatly in appearance. Now featuring a single mast and has no cannons for defense. It was also encountered on the Serpent Isle in Ultima VII Part Two.

At the time of Ultima IX the appearances changed once more. The prominent single mast became several.

At sea with a ship in Ultima VII

Due to technical shortcomings of this port, the ship is replaced with a Magic Boat. An unique item, which allows for rapid transport between ports.

The Avatar may buy the Magic Boat from Clint in Britain, who offers the item for a sum of three thousand gold pieces. Once purchased, the ship functions as an inventory item, and may be used while standing on a dock to instantly transport to another location, as if entering a teleporter.[1] This is done by selecting the target on the world map.

Within the Britannian Shards and especially its ninth expansion Ultima Online: High Seas more prominent ships can be found.

Whilst one may travel throughout much of the Realm afoot, there are alternate means of transport that make short journeys pass more quickly, and longer journeys feasible where once such voyages seemed unattainable. Common modes of travel include the use of horses and of sea-going vessels. Uncommon modes of travel are also rumoured to exist.

When a frigate docks near you, you can commandeer it - if the crew will accept you as a seasoned sailor. Otherwise, they'll turn the broadsides on you.

Ships are very scarce. The Pirate fleet has sunk most of the regular ships. When thou hast a ship, thou needst to maneuver it. To sail a ship, one must learn the ways of the winds. Thy ship may not sail against a wind, but must tack around it. Watch out for sudden shifts in the wind for the wind is a fickle elemental force.

At sea, masterful control of thy ship is necessary for survival. Ships have powerful cannons, but they can only fire broadside. To learn seamanship, thou must understand the ways of the water and the wind.

- from The History of Britannia (Ultima IV)

Visiting island communities requires travel by ship. Despite rather outlandish rumors of people wandering the heavens in great airships, sailing on water is the fastest and most popular long-distance mode of transportation there is. The most common watercraft on the ocean are frigates. Tall, stately three-masters, the frigates cut through seas swiftly and smoothly. They generally have a two-level open deck and a below-deck with a forward cabin, rear bunkroom, and centre cargo hold. Most ocean going frigates are built to accommodate heavy cannons for broadside fighting and have two gangplank gateways on each side.

Several of the port towns along the shores of Britannia boast of craftsmen renowned for their dedication to the construction of safe, dependable sea vessels. Whether you need a small skiff to get upriver, or a mighty sailing vessel for open sea travel, the local shipwrights will be more than happy to discuss terms. It is wise to pay attention to information about local sea and wind conditions before setting out in a new craft.

Ships may be purchased from shipwrights in nearly any coastal city. By Britannian law no ship is considered to be legally held unless the owner has in his possession that ship's deed of sale.

Normally, travel between the islands would be impossible for the common person (without the aid of magic, that is). To meet the needs of the poor souls forced to live without the luxury of the arcane arts, several craftsmen began building various watercraft and selling them to those who were planning voyages across the seas. To discourage the theft of such expensive vehicles, the people of Serpent Isle have established the practice of issuing deeds to ship buyers, thus denoting ownership.

Later note: Due to a decrease in the number of trips across the waters, no new ships have been constructed in the past several years and ship's deeds are things of the past. Thus, the once-common occupation of the shipwright has lost its value, forcing such builders to learn other trades. 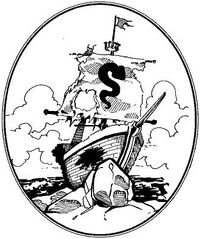 The following prominent ships were found:

The HMS Cape - Legendary ship whose speed and power was of such potency that merely equipping a ship with its magic wheel would steel the strength of the mundane vessel's hull.
The Empire - Captain Hawkins's ship. Shipwrecked somewhere near Serpent's Hold.
The Golden Ankh - only with Forge of Virtue, from Lord British, found in Vesper.
The Nymphet - from Russell in New Magincia.
The Beast - from Clint in Britain.
The Lusty Wench - from Budo in Buccaneer's Den.
The Dragon's Breath - from Lady Jehanne in Serpent's Hold.
The Scaly Eel - from Gargan in Trinsic.
The Excellencia - only in the planning stage by Owen of Minoc.
The Crown Jewel - used by the Fellowship, found at the Isle of the Avatar.
The Silver Hart - from Raven in Britain's harbor.

One is encountered on the Serpent Isle, while all others are destroyed:

The Arabella - Captain Hawk's ship, found at the Inn of the Sleeping Bull.