This article is about the land. For the game, see Ultima VII Part Two: Serpent Isle.

The Serpent Isle is a land located beyond the Serpent Pillars, whose landscape is dominated by the ruins of the Ophidians.

During the First Age of Darkness, the Serpent Isle was a continent of Sosaria known as the Lands of Danger and Despair. Following Mondain's defeat, the four continents separated, and each land went its own way—assumed lost in the cataclysm.

The Avatar visited the land during the events of Ultima I and Ultima VII Part Two: Serpent Isle.

The history of the land is extensive, dominated by several distinct eras of human civilization.

The Lands of Danger and Despair Edit

In the time of old Sosaria, this land was called the Lands of Danger and Despair. Once only ruled by the King of the White Dragon, soon a second kingdom was erected, the Kingdom of Shamino. Both kings lived in peace with each other. The peace ended however, when Mondain started to terrorize the land, like he did with all of Sosaria. Shamino, who was expected to marry the daughter of the King of the White Dragon, Beatrix, travelled to the Lands of Lord British to assist in the war, promising to return. He would return... only far, far later.

With Mondain's defeat, the world of Sosaria was sundered, and the Lands of Danger and Despair became isolated from the other lands. Shortly after, the Goblins started a bloody war against both kingdoms. Beatrix died of a broken heart during the siege of Shamino's Castle. The King of the White Dragon, sickened with grief over what he believed to be Shamino's betrayal and the death of his daughter, turned mad and killed everyone in his castle, before committing suicide.

The Time of the Ophidians Edit 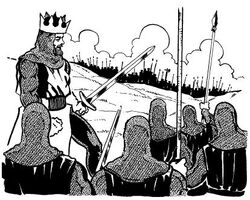 Destruction threatened to swallow the Lands of Danger and Despair, when suddenly a new way was opened. From the Ethereal Void, the three Serpents started to speak to the people. The Red Chaos Serpent taught them the way of Chaos. The Blue Order Serpent showed them the way of Order. The Great Earth Serpent was the mediator between the two, and taught how the combination of these two created Balance. A new age of enlightenment began for the people who now called themselves Ophidians, the followers of the Ophidian Virtues.

On the Serpent Isle, the new culture was readily accepted. Besides the Shrine of Balance, the cities of Skullcrusher and Spinebreaker were constructed to house the Temples of Chaos and Order, while six smaller temples were erected, one for each Force. The land became wealthy and peaceful, and it seemed that the new ways had solved all the continent's problems.

The War of Imbalance Edit

The disaster began when Exodus ripped the Great Earth Serpent out of the Void to guard his castle on the Isle of Fire. With their mediator gone, Chaos and Order started to argue which of them was more worthy. They became more and more aggressive. The Great Hierophant Ssithnos was murdered, and both sides blamed each other. This meant open war. Both sides commanded their followers to attack the followers of the other side, with the followers of Balance between all fronts.

Both sides set to fighting with eagerness. Both were convinced that their way was the only right one, and that the others were wrong. This extreme religious intolerance and the commands of both Serpents finally led to the horrible War of Imbalance. Both sides had now only one goal: the total destruction of the other side. Their never-ending hatred devastated the whole land. Chaos's side created horrible beasts, while Order's side created soulless Automatons.

In the end, Order won, and killed all followers of Chaos. They ripped the Serpent of Chaos out of the Void, and hacked it into three parts, the Banes of Chaos, imprisoning them. Then the followers left the destroyed land through the Wall of Lights in the City of Order to a place unknown. The Order Serpent only now became aware what it had done and found itself alone in the Void, with no one to talk to. Its followers gone, a hollow victory was the only result. As Chaos was now gone, Order went insane due to the lack of balance. When the Great Earth Serpent returned, it saw what had happened. Saddened with grief over this and the loss of its brother Chaos, it fell asleep, seeing no reason to exist any further.

During the time of the Quest of the Avatar, the land was finally re-settled by a group of humans. While nominally led by Erstam of Moon, all three major factions within the group had their own reasons to leave Britannia and sail through the Serpent Pillars to the Serpent Isle. Some mages from Moon did not want to accept Lord British's rule of virtue, and, feeling superior to everyone else, wanted to remain independent. The people of old Fawn left because they believed that beauty was a virtue, and felt left out when it wasn't included in Lord British's eight virtues. The inhabitants of the Montors were unhappy that there were other virtues besides Valor and therefore left.

The settlers discovered this new continent after passing through the Serpent Pillars. They started building their own cities, Monitor, Fawn and Moonshade, never realizing that this place had been once part of Sosaria. However, a central government was never established, hence enabling each group to retain their distinctive culture.

Monitor became filled with people for who fighting became a reason in itself, and everything not associated with it became shunned. The Knights of Monitor became pleased with themselves and had little honor left at the end. In Fawn, the people became narcissistic in their belief of beauty, hating everything not beautiful and seeing it as inferior. Moonshade continued its way of corrupt mages, who thought of everyone else as inferior to them.

Only the Xenkan Monks on Monk Isle stayed uncorrupted. However, after their founder Xenka left into the void, they lost their way and became frozen in passiveness, fearing to do anything at all to influence the outside world.

The beginning of the end of this part of history came with the arrival of other people from Britannia. While Gwenno wanted to explore the land, Batlin and his followers had far more sinister plans. They freed the Banes of Chaos, before catching them, to use them to become very mighty. However, this started horrible Teleport Storms, the first sign of the beginning imbalance caused by this act.

The Avatar and three of his companions followed Batlin, wanting to stop him. But when they reached him, he was ready to go through the Wall of Lights. However, the ritual went awry; Batlin wrongly use the Chaos Blackrock Serpent on Temple Order's Wall of Lights. This causes Batlin's death. The Guardian simply watched him die; knowing Batlin's treachery. The incident also causes the Banes to sprang free, possessing the Companions. In an unbelievable holocaust, the Banes of Chaos killed much of the population of the Serpent Isle; Monitor and Fawn were obliterated, while Moonshade suffered to a lesser extent.

While the Avatar managed to recapture the Banes, the imbalance had yet to be resolved. Desperate measures had to be taken; Dupre sacrificed himself in order to restore the Chaos Serpent. At the Shrine of Balance, the three Serpents were re-united, restoring balance to Serpent Isle. The Avatar departed the land shortly thereafter.

Following the holocaust, the Xenkan Monks took it upon themselves to assist the survivors. Whether civilization will flourish again in the land is yet unknown.

The Serpent Isle consists of two major islands and several outlying areas. The largest island spans from the city of Monitor in the southeast, northward up to Spinebreaker.

The landforms of Serpent Isle did not dramatically change like Britannia's did following the Age of Darkness. The continent became notably colder and the northern regions completely froze over, but otherwise the shape of the land stayed the same.

The Lands of Danger and Despair Edit

Serpent Isle - After the War of Imbalance Edit

Retrieved from "https://ultima.fandom.com/wiki/Serpent_Isle?oldid=63784"
Community content is available under CC-BY-SA unless otherwise noted.