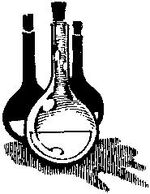 If a spellcaster isn't available and a magical effect is needed fast, potions are a practical resource. Drinking these vials of colored liquid has the same effect as the corresponding magic spell, yet can be used even in environments where magic doesn't work. Potions can be bought at an apothecary.

Potions first appeared in Ultima V. After that, they didn't change, apart from what is listed below. In Ultima IX, the system of potions was altered significantly. Also, a special potion called Serpentwyne appeared.

The potions are color-coded as follows:

On Pagan, the potions have different uses:

In Ultima IX, potions are as follows: