Origin Systems, Inc. (sometimes abbreviated as OSI) was a computer game developer based in Austin, Texas, that was active from 1983 to 2004. It is most famous for the Ultima and Wing Commander game series.

The company was founded in 1983 by brothers Robert and Richard Garriott ("Lord British"), their father Owen, and Chuck "Chuckles" Bueche after Richard had terminated his contract with Sierra On-Line to publish the third part in Richard's Ultima series, Ultima III.

However, in the summer of 1992, Origin came into serious financial problems. The market for home computer ports had vanished rather apruptly, leaving Origin with their remaining stocks of these ports. Also the re-tooling of the distribution pipeline for the IBM-PC had cost them many resources. It was impossible to get a loan since right during that time the banking system in Texas was in a severe crisis. In September 1992 Electronic Arts acquired the company.

While people at Origin at first thought it would open new resources to them, EA soon treated the company like a money-making machine and gave them deadlines for the games, that often were impossible to hold. This caused Ultima VII Part Two, but especially Ultima VIII lose numerous plot elements just because there wasn't any time to finish them. Ultima IX even was pretty much crippled because of the deadline being far too tight, resulting in a bug-ridden game with an emergency-plot created at the last minute.

In 1997, they released one of the earliest and most successful graphical Massively Multiplayer Online Role-Playing Games: Ultima Online. After this title, Electronic Arts decided that Origin would become an online-only company after the completion of Ultima IX in 1999. However, within a year's time, EA cancelled all of Origin's new development projects, including Ultima Online 2, Privateer Online, and Harry Potter Online. Richard Garriott left Origin shortly after and founded Destination Games in 2000.

In later years, Origin mainly existed to support and expand Ultima Online and to develop further online games based on the Ultima franchise such as Ultima X, originally to be released in 2004 but later cancelled. In February of 2004, the studio was disbanded by Electronic Arts.

Origin's motto was "We create worlds" and its games were known for their well-realized (if not always creative) plots and the amount of detail furnished into the game's stories.

The original Wing Commander, for instance, came with a booklet purporting to be a shipboard magazine named Claw Marks, written and published by the crew of the Tiger's Claw (ghost written by Aaron Allston); it provided the player with a number of irrelevancies (such as an interview with the star of a popular televised wartime drama) as well as convenient statistics and user guides for ships, weapon systems, and information regarding pilots and tactics on both Terran and Kilrathi sides and also hints on a rich background history. Claw Marks was actually a fairly rare commodity on eBay before it was re-released as part of the Kilrathi Saga packaging. 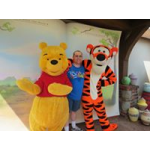