Edit
watch 01:36
We're Getting Mutants in the MCU - The Loop
Do you like this video?
Play Sound

Moonshade is located on the Isle of Beyond, which lies to the east of Serpent Isle's mainland. Seemingly harmonious with the city-state's philosophy of deception and dissemblance, the surrounding land is riddled with hidden secrets, including a magical dungeon concealed within the nearby mountains and an archaic series of subterranean tunnels connecting the island back to the Serpent Isle's eastern coast.

During the Avatar's adventures on Serpent Isle, Moonshade was home to a stratified society split between mages and Mundanes. The former comprised the ruling class of the city, dwelling in luxury and opulence, while those without talent in the mystic arts eked out existences as tradesmen and artificers. While limits on the powers of magicians were established by the ruling Council of Mages, the Moonshadian emphasis on the illusory seemed to be manifest in the ruling classes' behavior, with numerous mages flouting laws or engaging in clandestine projects.

The mages of Moonshade were descended from the people of the Old Sosarian city of Moon. During the early years of the Britannian Enlightenment, many of these magicians rejected Lord British's push to install the Eight Virtues as state philosophy, rejecting the ideals of Honesty that would prove foundational to Britannia's own city of Moonglow. Believing that magic was inextricably tied to the illusory and phantasmal, these mages joined with Erstam in his flight from the nascent Britannia on a ship known as the Osprey.[1] They eventually made landfall on what had formerly been the Sosarian Lands of Danger and Despair and established a city in keeping with their own ethics of magic. Erstam, however, who had been both mentor and leader to Moon's spellcasters, grew both increasingly unstable of mind and increasingly impatient with his former students, and he eventually withdrew from Moonshadian society to live in isolation on a neighboring isle.

At the time of the Avatar's adventures on Serpent Isle, Moonshade was under the governance of the MageLord Filbercio, who was supported by a Council comprising of the weather magician Gustacio and the red sorceress Rotoluncia (who was shortly thereafter replaced by Mortegro following her death and by Fedabiblio following Mortegro's disappearance). The hero's encounters with the constantly politicking magicians led them through a number of harrowing experiences, but the Avatar and their companions were eventually able to leave the city relatively unharmed and in possession of a book of magical spells. After the release of the three Banes of Chaos, however, Moonshade was laid to waste by the Bane of Anarchy, who slew a large number of the city's inhabitants while in control of the body of the Avatar's companion Shamino.

The mages of Moon rejected the Oath of Honesty which Lord British demanded of them, believing that absolute honesty was both cruel and contrary to civil peace. Moonshade's name derives from the deep Moonshadian appreciation for the indirect and ephemeral, with the "Moon" part of the name being indicative of the ascendant and mystical power of magic over mortals and the "Shade" part of the name symbolizing the shadow in which mages hide from the unrelenting light of Honesty.[2]

As a society, Moonshade organized itself into castes depending on individuals' proficiency in the magical arts. Adepts, who are capable of casting the highest levels of spells and who typically specialize in specific fields, formed the ruling class, and only adepts could serve as the ruling MageLord of the city or as one of the members of the supporting Council of Mages. Below these were ranked the lesser mages, who were trained in the mystic arts but who possessed powers less extensive than the adepts. The lowest ranked citizens of Moonshade were the Mundanes, those who have no capacity for spellcasting at all. While mundanes skilled in crafting goods or providing services useful to mages were allowed some measure of respect, to be a mundane in Moonshade was to be practically guaranteed second-class citizenship. 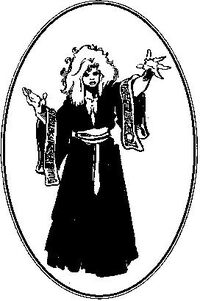 Both in Sosaria and here on the new continent, this town is dominated by members of my profession. In an attempt to rid ourselves of Lord British's tyrannical rule, we set out, joined by the residents of Fawn and the twin cities of Montor, to find the Serpent Pillars. Upon discovering land, my fellows and I settled immediately upon the Isle of Beyond's lake shores. So far, we have agreed upon government by a council of mages. Those who live in Moonshade trade with the Guilder.
Later note: As the surrounding area is filled with use I resources, Moonshade has attracted a great many artisans. They trade in wood-workings, glass, weaponry and wine, in addition to our own supply of reagents. I know the others are displeased, as am I. However, I find still less pleasure in the ridiculous propositions of my fellow enchanters. Beragdole even had the audacity to claim I was becoming paranoid! I have no need for their petty squabbles and inconsequential spells, for my research has taken me far beyond their capabilities.

Further note: I am forced to withdraw from Moonshade. Like the other two centers of population, the city has prospered and of that I am proud. But the incessant babbling of the Council of Mages, an organization I faulted from the beginning, reaches inside me, wearing at my sanity. There is now a Magelord who reigns over the Council; practically a king! Here, away from the others, I can pursue the true discipline of magic.