Editable Codex
Register
Don't have an account?
Sign In
Advertisement
in: Human, Articles that contain spoilers, NPCs of Ultima I,
and 3 more

Mondain was an evil sorcerer who heralded the First Age of Darkness in Sosaria. He was the chief antagonist of both Ultima I and Akalabeth. Together with Minax and Exodus, they were known as the Triad of Evil, the three main villains of the Age of Darkness.

Mondain was the second son of the wizard and king, Wolfgang.[1] As a young boy, Mondain was often subject to fits of rage and depression. He found solace in hunting animals solely as a means of confirming his power over life and death. His father, a powerful and well respected wizard, witnessed this behaviour and planned to send him away to be educated in virtue. Once he imparted these plans upon his son, Mondain instead slew his father in his sleep and stole from him a magical ruby gem that harnessed the power of the sun.

Mondain turned the magic in the gem upon itself, twisting it into an evil artifact of darkness. The dark magics now woven into this black gem helped ensure Mondain's desire to live forever, thus earning it the name the Gem of Immortality.

Using his newfound powers Mondain released his wrath upon the land, allying himself with all manner of evil beings and setting them upon the good folk of Sosaria. To protect himself from assault, Mondain secreted away one thousand years into Sosaria's past and established his stronghold there, rendering himself effectively invincible.

He remained there until the Stranger from Another World (later to be known as the Avatar) located a time machine, traveled back in time, shattered the black gem, and ultimately defeated the sorcerer.

Perhaps more than any other villain in the land, Mondain's death had a number of lasting impacts upon Sosaria.

During his reign of terror, Mondain had taken the enchantress Minax as an apprentice and consort. This unholy union would later result in the birth of their progeny, the entity Exodus. These three together formed what became known as the Triad of Evil. However there was no public knowledge of the other two until they revealed themselves to the world, unleashing their own reigns of terror in Ultima II and Ultima III, respectively.

The Skull of Mondain, when wielded, had the power to instantly destroy all enemies on the battlefield, but at great sacrifice to the bearer's karma. It was located at the bottom of the Great Sea between three volcanoes, where Terfin was later located (and also suggesting the location of Mondain's stronghold). The Avatar found the skull in Ultima IV and dropped it into the entrance of The Abyss, preventing anyone from using it again and presumably destroying it forever.

After his defeat, Mondain's spirit was summoned by the gargoyles and embodied in their Shrine of Control. To the Gargoyles, Mondain exemplified the principle of Control and his enshrinement served as a reminder to the evils of unrestrained control.

The Avatar visited this shrine and spoke with Mondain in Ultima VI where he indicated remorse for his actions. The shrine was destroyed with the Realm of the Gargoyles but was later rebuilt on Terfin. For reasons unknown, the Avatar could not speak with Mondain again in Ultima VII. 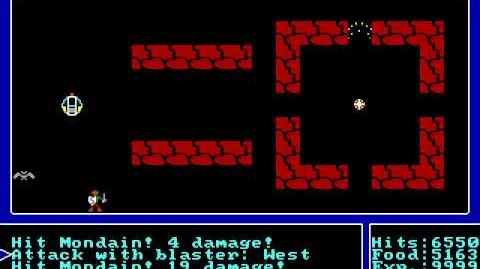 Ultima I - The First Age of Darkness - ENDGAME