Lithos is one of the four Elemental Titans of Pagan. He is the Titan of Earth, and also rules over the dead of Pagan. The school of magic connected to him is Necromancy, the magic of earth. Like all four Titans, Lithos is a servant of the Guardian. The Avatar puts an end to him in Ultima VIII.

As did all the Titans, Lithos became powerful when the Guardian tricked the Pagans to make them powerful through numerous means. In the war against the Zealans, he shook the earth and devastated whole regions, before assisting the Guardian into mostly destroying the world.

However, after the Guardian moved on, he came into conflict with the other Titans -- primarily Hydros, Titan of Water. Lithos demanded high prices for not devastating the land, but earthquakes still occasionally took place. It only ended when the man later known to be the first Necromancer made a pact with Lithos: he would leave them in peace, and in return, Pagan's dead would be offered up to him. This went on for many centuries, and Lithos' army became huge.

This came to an end when the Avatar arrived in Ultima VIII. At first, Lithos was pleased that the hero wanted to learn the ways of earth. Even this last desperate act couldn't save him when the Avatar confronted him in the Ethereal Void, and used the Heart of Earth to drain Lithos of all power, destroying him once and for all. 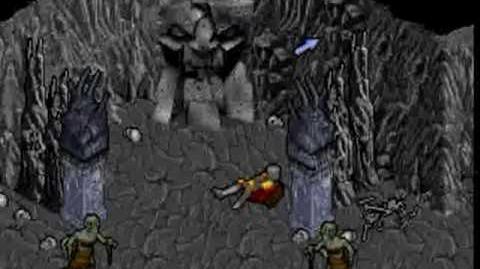 The Avatar meets Lithos for the first time.

Retrieved from "https://ultima.fandom.com/wiki/Lithos?oldid=63932"
Community content is available under CC-BY-SA unless otherwise noted.