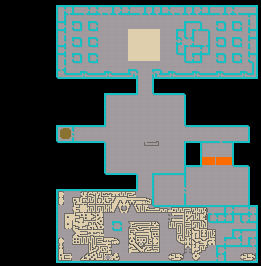 The ancient underground city of Kotl is the last witness of the once great culture of the beings of the same name, who had once ruled over Eodon.

The Kotl once had managed to create sophisticated technology powered by a corrupted Moonstone, creating the high-tech city of Kotl. For one reason or another, they wanted slaves to do their bidding and abducted humans from various time periods. Once they realized that humans were too independent, however, they created the Myrmidex as work slaves.

This proved to be their undoing, as the Myrmidex Queen seized the Moonstone and cut the Kotl off from their invulnerability-fields. In the following battles, the Kotl had to flee their city and over time became the Sakkhra, fallen from their former grace. The Myrmidex also left the useless city and it became forgotten.

Prior to Savage Empire, Dr. Spector discovered the city, but went insane when the force-field protected him. Later, the Avatar had to enter the city with the help of the Kotl Gem in order to destroy the generators and finally disable the shields. Doing so in the end with the help of the Kotl-Automaton, Yunapotli, caused a chain reaction, which caused the entire city to finally collapse.