Khumash-Gor was once the most powerful warrior of all time in Pagan. His political conquest, which united Pagan, was even held by the Zealan Gods in the highest regard. Despite all this, he was still only a mortal, and eventually succumbed to death. To honor him, his tomb was built directly adjacent to the Shrine of the Ancient Ones. However, his spirit still was full of battle lust, and he guarded his tomb like a berserker, killing anyone who dared to enter and disturb his rest.

He found his final peace when the Avatar defeated his ghost in Ultima VIII, in order to reclaim the Obelisk Tip and the Scimitar of Khumash-Gor from his tomb. 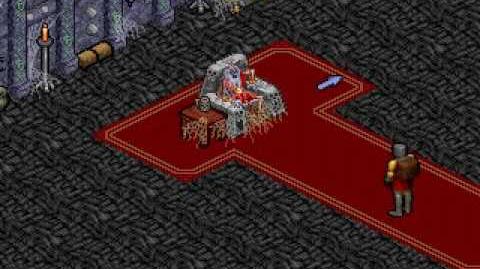 Retrieved from "https://ultima.fandom.com/wiki/Khumash-Gor?oldid=61131"
Community content is available under CC-BY-SA unless otherwise noted.