Justice is one of the Eight Virtues.

Justice, founded on the principles of Truth and Love, is the devotion to truth, tempered by love. It is the wisdom that perceives what is right and what is wrong in human action. Yew, a gathering place for druids in their pursuit of justice, is the site of the High Court of Britannia and nurtures the great legal and judicial minds who practice there.

The Shrine of Justice is situated north of Yew, at the coast of the sea. 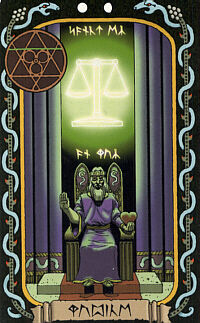 During Blackthorn's tyranny, Justice was turned into a law: "Thou shalt confess to thy crime and suffer its just punishment, or thou shalt be put to death."

Justice through the Ages[]

Meditating at the Shrine of Justice will give these insights;

"'Tis now thy sacred Quest to go unto the Codex and learn the weakness of the Unjust!"

"Those who inflict injustice upon others, cannot expect fair treatment unto themselves."

"Justice without force is impotent. Force without justice is tyranny."

Justice is the devotion to truth, tempered by love.

Justice is the wisdom that perceives what is right and wrong in human action.

Wherein Truth and Courage are reconciles lie the secrets of Justice. It bears no moderation, for it does not shine in the fog of war. The fiery will that spurs one towards Justice can lose sight of the Truth. To judge with a level eye demands Truth and Courage of conviction to pursue the Truth. In reward, Justice shall give temperament to your spirit.