Hydros is one of the four Elemental Titans of Pagan. She is the Titan of Water, and also the most deceitful and cruel one. She also rules over the Ghouls of the sea. The school of magic connected to her is Tempestry, the magic of water. Hydros is like all four Titans, a servant of the Guardian. The Avatar puts an end to her in Ultima VIII.

Like all of the four Titans, Hydros became powerful when the Guardian tricked the Pagans to make them powerful through numerous means. In the war against the Zealans, she drowned them with huge rainfalls, and storms destroying vast areas, before assisting the Guardian into mostly destroying the world.

However, after the Guardian moved on, she came into conflict with the other Titans, primary Lithos and Pyros. Hydros demanded high prices for not devastating the land, but still on occasion let storms decimate it. It ended, when Kalen, later the first of the Tempests of Tenebrae, trapped Hydros at Carthax Lake with the Tear of Seas, forcing her to give free the body of his love, and give him a part of her power. This enraged her, and so she waited for the moment she could get revenge.

The moment came when the Avatar asked her for the powers of Tempestry in Ultima VIII. Tricking the Avatar into releasing her, she started huge rainfalls to drown the land. It ended, when the Avatar confronted her in the Ethereal Void, and drained her of all powers with the Tear of Seas, destroying her once and for all. 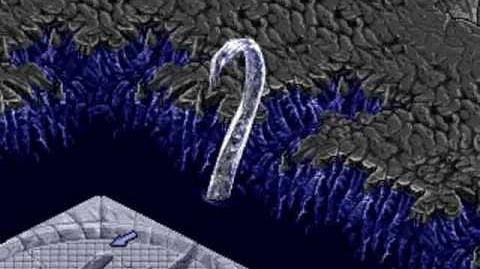 The Avatar meets Hydros for the first time.

Retrieved from "https://ultima.fandom.com/wiki/Hydros?oldid=63931"
Community content is available under CC-BY-SA unless otherwise noted.