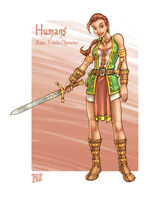 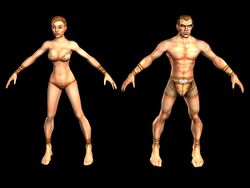 Humans usually measure between 5'5" and 6'5", and their individual appearance varies widely. Their hair and skin can take on a wide variety of hues, and human hairstyles and facial hair are often sculpted to express their individuality. Generally stockier than elves and somewhat leaner than gargoyles, humans often find themselves lumped into the category of "average" - although you'll never hear a human refer to themselves in that manner.

History
The Guardian Link
Having once been two parts of a whole, the Avatar and the Guardian had a very real connection even before the Avatar ascended, taking the Guardian with him into a higher plane. And in those moments while they were joined again, the Guardian was once more, for a time, inside the mind of the Avatar. Not for long - but long enough to know that the Avatar wanted most desperately to bring the humans of Britannia to Alucinor, for they had a longer history with the Virtues than anyone.

With this knowledge, the Guardian's path was clear. The humans must be prevented from reaching Alucinor at all costs. The Guardian also sensed the Avatar's plans to call on the elves and the gargoyles, but it was the humans that seemed to be the crux of the Avatar's search for the Virtues.

Sensing the Guardian's presence within his thoughts, the Avatar knew he could not approach the humans directly - if he instructed the humans to come to Alucinor in any specific manner or at any given time, the Guardian would detect and prevent it. He had to find another way. 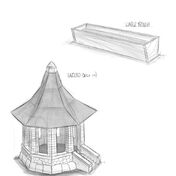 He turned to the one person he believed had the drive and charisma to do what he needed. In what seemed to be a dream, the Avatar entered the mind of Raven, his final companion in the moments before his Ascension. In this vision, he called on her to find a way to convince the humans to follow her to Alucinor, where the Avatar would be waiting for them. But she would have to lead them herself, for because of his connection to the Guardian, it was only without the Avatar's knowledge that the humans could surprise the Guardian and arrive in Alucinor safely. She accepted without hesitation.

Raven never doubted for a second the truth of the Avatar's claim, because in that moment while he was inside her mind, she could feel his presence and power. But for that moment, Raven also recognized another presence - a chilling, menacing awareness of something darker; something that had followed the Avatar into her mind.

Immediately, Raven set off for Britain to convince the ruling council that they were needed by the Avatar, but her claims were dismissed quickly. So quickly, in fact, that she grew to suspect something else was at work. After months of closed doors and refusals of help, she realized that the presence she had felt during her connection with the Avatar had been the Guardian himself, and that even though he was no longer able to see into her mind, his attention was still focused on her. As a result of his influence, she knew she would have no help in her quest.

Abandoning the idea of gaining support from Britain, she took to touring the countryside alone, spreading the word to every town and settlement across all of Britannia. It was a grueling task, and support grew slowly. At times, it seemed that her cause would never yield enough followers to help the Avatar in his fight, but she couldn't stop trying. Even though her vision had been brief, she had felt too much of the Avatar's pain and struggling to give up.

After over a decade of tireless campaigning, it was finally decided that she and her followers would make the move to Alucinor. But even as she reached the final stages of preparation, she knew, with a certainty she couldn't quite explain, that the Guardian was still watching her, and that he would never allow her to cross over into Alucinor. 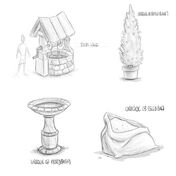 On the day of departure, Raven led the way, to be followed shortly after by hundreds of her followers. As expected, the Guardian anticipated her movements. Just as she left Britannia, the very fabric of Alucinor wavered - not enough to disrupt life there, but enough to ensure that Raven and her followers would not reach the new world. But the Guardian's hold on the world of Alucinor was minimal, which meant that this feat required more of his power and concentration than anything he had attempted thus far.

Raven had left Britannia, but neither Raven nor those followers ever arrived in the new world. He had succeeded in cutting off the Avatar's best hope for bringing humans to Alucinor - or so he thought.

Sacrifice of the Raven
During her vision, Raven knew that the Avatar had sensed she still had strong feelings for him, and that she would do almost anything to see him alive again. Knowing this, she knew that her own sacrifice would be something that the Avatar would never expect - and thus would not be expected by the Guardian either. 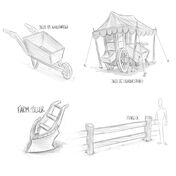 Raven's plan had called for a contingent of Britannians to follow her to the departure point, as if intending to travel to Alucinor along with her. However, these were not the followers that would make up the new human race in Alucinor. While the Guardian's full attention remained on Raven, the true force traveled from a different point, arriving safely in Alucinor near the area that would eventually become the town of Rule. The followers that the Guardian had assumed were Raven's supporters simply stayed in Britannia as she had instructed, their purpose served.

The Avatar's faith in Raven had been vindicated, but at a high price. She was gone, lost or dead somewhere between worlds. Searches, originated both from Britannia and from Alucinor, turned up nothing. The Avatar mourned her loss greatly, but even stronger than his sadness was his determination not to allow her sacrifice to have been in vain. He turned his attention towards ensuring the humans were secure in Alucinor, and to his immense gratification, Raven soon became a known as a martyr to the human people. 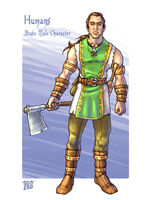 Organization
Humans live in medium towns, although occasionally they adopt a nomadic lifestyle. Even those who prefer to avoid towns, however, will always return at a moment's notice to help their fellow humans in need. 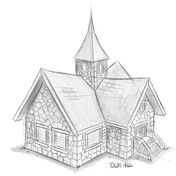 Humans of Alucinor are ardent followers of the Virtues, and prefer an organized society with recognized leaders, written laws, and complex justice systems. In recognition of their place in the new world, the humans chose not to carry over the tradition of traditional Britannian holidays, creating instead new holidays, such as the Day of Ascension, in honor of the Avatar's sacrifice, and Raven's Remembrance Day, in honor of the martyr who gave her own life to ensure that the humans reached Alucinor safely.

Disposition
Humans are quite creative and adaptable, and are capable of surviving in almost any climate. Thanks to this characteristic, humanity as a whole has evolved into a variety of cultures. 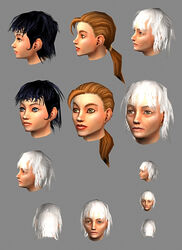 The humans who chose to travel to Alucinor, however, are a rare breed. These stalwart followers were willing, on Raven's word alone, to lay down their livelihood and everything they'd once had in Britannia for the chance to master the Virtues and becomes worthy allies of the Avatar. Determined and strong-willed (to the point of being considered obstinate at times), they will stop at nothing to repay their debt and bring the Avatar to victory.

They are highly perseverant, and have little patience for procrastination. If a fire breaks out and destroys a human settlement, it is rebuilt within mere days. Within only a few weeks, it will have been reinforced and strengthened, resulting in a stronger encampment than the previous one. Humans will never shy from a daunting task, but rather welcome the chance to make a difference in every way they can. The humans of Alucinor made the trip to the new world for one purpose: to eliminate the evil of the Guardian. They do not seek to expand their borders, or to fight against other races. They are extremely proud of their history with the Avatar, envisioning themselves as the chosen race of Alucinor and the Avatar's last, best hope for peace. 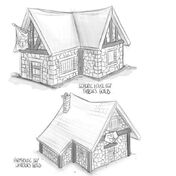 Humans enjoy wearing bright colors and ornate designs, although they will abandon these without hesitation if the situation warrants. To a human, functionality is key, meaning they are much more concerned about how fast a job gets done than how they appear while doing it.

The women who traveled to Alucinor, as a rule, are less preoccupied with their appearance than the standard human woman. It's not unusual in the slightest to see women fully garbed in armor or work clothes, fighting or working alongside the men in equal roles.

Combat The tendency for humans to absorb ideas from other cultures is well known. This they have done to great advantage in the field of combat, where humans capably handle magic, melee, and ranged weapons. Their ability to learn and implement new tactics, paired with their sheer determination and strength of will, makes a trained human a worthy foe indeed.