Edit
watch 01:36
We're Getting Mutants in the MCU - The Loop
Do you like this video?
Play Sound

Honesty is one of the Eight Virtues.

Honesty, founded on the principle of Truth, is scrupulous respect for truth- the willingness never to deceive oneself or another. The pursuit of truthfulness, with respect to oneself and with respect to other beings. Honesty and the quest for truth is taught by the mages of Moonglow.

The Shrine of Honesty is situated on Dagger Isle, north of Verity Isle. 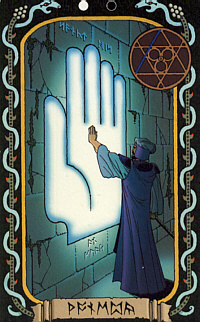 During Blackthorn's tyranny, Honesty was turned into a law: "Thou shalt not lie, or thou shalt lose thy tongue."

Honesty through the Ages[]

Meditating at the Shrine of Honesty will give these insights;

"'Tis now thy sacred Quest to go unto the Codex and learn the failing of Dishonesty!"

"A dishonest life brings unto thee temporary gain, but forsakes the permanent."

Honesty is scrupulous respect for truth—the willingness never to deceive oneself or another.

To the self, be true. Honesty begins with the will to regard the Truth in one's heart. A true heart spreads its warmth to the home and across the entire world. In seeing the world in true form, one can draw upon the magic that connects all living things: the power of the ether. To the self, be true. In repetition and experience, you shall find honesty whose comeliness inflicts shame upon evil.