Created by pseudo-magical experiments in the time of the Ophidians, the green-skinned goblins are an aggressive and greedy lot, and a constant threat to the cities. Goblin males often wear Chain or Antique Armor and wield heavy weapons like swords. The female goblins wear little more than loincloths, and often use blowguns. Both males and females are proficient with spears, which they throw at foes before engaging in melee. Known to torture and mutilate their enemies, they are also said to actually eat them alive.

Goblins roamed the land freely in Old Sosaria during the time of Exodus, but afterwards are found mainly on Serpent Isle in the Western Forest, from which they strike out at the many Human settlements. 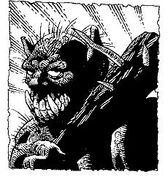 The Goblins originated from forbidden arcane experiments performed on prisoners and other victims by demented, power-seeking mages. (It was for causes like these that magic was once banned in our lands.) During the Third Age of Darkness, Exodus bred the Goblins into an army dedicated to his wicked cause. Following his defeat, the survivors vanished from the face of Britannia - hunted down by vigilantes or banished to other realms. (In those times, the Goblins were so loosely bound to this world that a single spell could expel them from this plane of existence.) It was only after our Proclamation went out, promising clemency to those primitive monster forms who would undertake to follow the Path of the Avatar, that the Goblins were rediscovered. A delegation of Goblinfolk appeared at the gates of Castle Britannia, asking for an audience with Lord British. Not just one but two species of Goblins had survived in hiding from the days of Exodus. The Gray Goblins, originally mountain dwellers, had skulked in the caves of the Serpent's Spine mountains. The forest-dwelling Green Goblins hid themselves by retreating into an underground river's channel, near the baneful lake called Venom.

Today, virtuous Goblinfolk make up one-third of our community. There was a time when a Green Goblin would rather slay a Gray Goblin than any other enemy, but the Path of the Avatar has brought the tribes together as brothers. (Though the two species rarely come to blows nowadays, the Gray and the Green still attempt to outdo each other whenever possible in matters of Virtue. Old enmities die hard. - Corby)

The Goblin race originated in now-forbidden experiments among the earliest wizards of our lands, performed shortly before the period in which magic was banned outright in Britannia. Later, in the Age of Darkness, the man-machine Exodus bred the few remaining goblins into a substantial army with which he threatened the land. After the downfall of Exodus, the goblins fled into seclusion, forming two nations, the Grey and the Green.
When the Age of the Avatar began, Lord British granted clemency to all "monstrous" folk who would pledge to follow the path of Virtue and it was thus that many goblins came to be accepted as members of our society, although they continued to keep largely to themselves, and to dwell in their own enclaves. I would advise thee, though, to be wary of any goblins you might meet on the road, far from the protection of a town, as they are a violent people, and some still cling to their old practice of banditry. Taken singly, a goblin is weaker than an average human, but for this reason they frequently travel in groups.

The result of ancient magical experimentation (poorly conducted experimentation, I am sure) goblins only vaguely resemble the men from whom their forebears sprang. Although some attempt has been made to civilize them, surliness still dominates their nature.

These wretched creatures would foul their mother's supper plate. At war with the world around, the goblin procreates broadly and rapidly as a defense. Though most goblins attack with an open-handed blow, the sergeants of any band carry weapons as totems of station. Leaders of the goblin party have a shaman's power and will cast magic from behind the warriors. Whatever the form of goblin, attack him directly, for he will not hesitate to seek the advantage.