Erstam is a very powerful mage on the Serpent Isle in Ultima VII Part Two, who had lived through the entire time of the new settlement. He also was one of the initiators of the settlement.

Erstam was a mage in Moon, searching for the secret of immortality. He had already met partial success when Lord British ordered the cleansing of Moon, throwing out all the corrupt mages and turning the city into Moonglow. The corrupt mages felt that they didn't have a future in Britannia and Erstam became their representative. Together with two other unhappy groups from old Fawn and the Montors, they left for the Serpent Isle.

On Serpent Isle, Erstam was in his element. Beside his experiments, he went fully into exploring the island and its wonders. During that time, he also built the dungeon for Silverpate under the Inn of the Sleeping Bull (although Silverpate tried to cheat him, resulting in Erstam sending him to some hungry Daemons) and had fathered his son Pothos. But he gravely disliked how things turned out in Moonshade and in the end left for the Isles of the Mad Mage, where he could fully concentrate on his experiments on immortality and creation of life. Thefts of his Serpent Teeth and second Serpent Jawbone made him especially paranoid against intruders. Shortly before the Avatar arrived, he wrote the book Beyond the Serpent Pillars.

Erstam reportedly began to go mad after the death of his love, the enchantress Drogeni.

In Ultima VII Part Two, Erstam was initially displeased at the Avatar's arrival, but then he offered, after some digging, his Serpent Jawbone, should the Avatar bring him a Phoenix Egg and help with his experiment to create life (he had hacked up his assistants for experiments to create a Frankenstein-like creature). The Avatar did as told and Boydon was created. Erstam kept his word and the Avatar got the Jawbone and the last few teeth Erstam possessed. Erstam then allowed the Avatar to leave with Boydon, to spread the word that he, Erstam, had managed to create life. 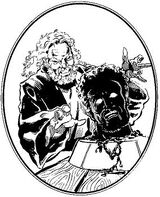