For the article on all of the virtues in the entire Ultima series and their relationships, see Virtues.

After the defeat of Exodus and the closing of the Age of Darkness, Lord British created a Virtue system designed to be a new vision of life, for which people might strive. As most of the evil from outside had been vanquished, Lord British wanted people to start rooting out the evil that lurks within themselves. Each of the eight main towns was dedicated to one of the Eight Virtues, and Shrines were built near each one of them. Castles and Shrines were also created to be dedicated to the Three Principles that lead to the Virtues.

In order for this new philosophy to work, Lord British created the Quest of the Avatar, to find someone that could achieve enlightenment in all Virtues. This embodiment of the Virtues, the Avatar, would then become an example for the rest of Britannia, to motivate people into improving themselves in the different Virtues.

The Eight Virtues, defined first in Ultima IV, are based on Three Principles:

These Principles are themselves derived from the Axiom of Infinity, which is represented in Castle Britannia. They are also represented by the Flames of the Principles.

The Principles are combined to form the following Eight Virtues:

The Embodiment of the Virtues in the game is the Avatar, the character who the player is roleplaying. He (or she) is commonly seen with an Ankh which represents life.

The relationship between the Principles and Virtues is often explained this way: 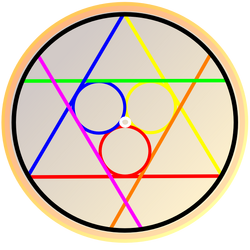 Humility is the most difficult Virtue to describe, as it cannot really be understood without its Anti-Virtue, Pride. Pride merely has nothing to do with Truth, Love and Courage; Humility is similar, but rather than being a complete antithesis, it exists independently of the Principles and acts as their foundation.

The New Magincian ghosts also have a few things to say about Humility and pride, from which the following may be constructed:

Humility: The absence of Truth, Love, and Courage is Pride. Pride is the surest measure of goals never attained. Pride goeth before, Shame cometh after. This Shame leads to awareness of Humility, the root from which all Virtues grow. Humility is to strip oneself of all conceits.

See also The Codex Symbol, which explains the relationships between the virtues through colors.

The Principles of the ShadowlordsEdit

In Ultima V, each of the Shadowlords opposed one of the three Principles.

Blackthorn's Code is a good illustration of the fact that the Virtues always come from one's own self rather than the norms of society; codifying ethics into law does not automatically make evil people good. Further, unethical lawmakers can take the Virtues and turn them into something that is quite contrary to what Virtues actually stand for.

Strangely enough, The Wizard of Oz played a part in the creation of the virtues, with designer Richard Garriott stating at one time that the three companions of Dorothy Gale could be linked to the three principles — Scarecrow (Truth), Tin Woodsman (Love) and Cowardly Lion (Courage). This is also alluded to in Ultima VI and Ultima VII, where one can find a copy of the book - the description blurb the game gives alludes to this relationship as well. Richard Garriott claims it is his favourite book.

In an interview with Computer Games Online, Richard Garriott revealed some things about how he developed the Eight Virtues for Ultima IV:

"I started with a whiteboard and wrote down all of the virtues and vices I could think of, the seven deadly sins, many, many others. Obviously I wanted to talk about a few of these, but I couldn't address them all."

"As I did more research, I began to notice things like greed and envy would have some overlap, so I needed to create a core set. You can easily split them up into virtues and vices, and eventually arrived at three primary aspects, which became the principle virtues of Truth, Love and Courage. Truth became Honesty, Love became Compassion, Courage became Valor, and I created the eight possible combinations of these three. Truth tempered by Love became Justice, Love and Courage became Personal Self-sacrifice, Courage and Truth became Chivalric Honor. Truth Love and Courage was kind of arbitrary, so I thought, "What is the all-encompassing virtue?" I said, "Spirituality," whether or not you're doing good or bad deeds in the world."

"And what if you do none of the above? If not being virtuous is part of your psyche, I call it pride. Pride is not a virtue, so I decided to use the opposite, Humility. Since the eighth combination created a non-virtue, I began to create bits of pseudo-science I was pretty pleased with."

"Ultimas are big in mathematical pseudo-science and alchemy, so I invented the Codex of Ultimate Wisdom to graphically illustrate their relationship. Then I associated the cities with the virtues, with the eighth one - which I called Magincia, the city of Pride - destroyed. Having these seven positive things with one eighth one that had to be flipped made for a nice variety of quests you could create."

"Once the eight virtues were created, I needed to come up with quotes that expressed why each was important. And had to think of tests for people to see if they were supporting that virtue. Honesty was easy - I let you cheat shopkeepers and steal things, but the game kept a record where it could, later in the game, come back to haunt you. Just like the real world. Why is it you don't steal from people? Because if you do they'll throw you in jail or disown you. So that's how I designed the game - people will reject you if you're not honest."

"So I went virtue by virtue and tried to craft these types of experiences."

Retrieved from "https://ultima.fandom.com/wiki/Eight_Virtues?oldid=63839"
Community content is available under CC-BY-SA unless otherwise noted.