In several Ultima games killing children was put in by Richard Garriott.

Ultima V has a dungeon room where you find children locked in cages. Pull a lever, and the children rush out and attack you. The game causes you to lose points in the virtue valor if you ever run from battle, so you have to kill them to prevent that from happening.

One reviewer found this and complained. Richard Garrott stated in The Official Book of Ultima that his own mother called him up to ask him to just take it out of the game. He refused.

Ultima VII has children locked away in one area you had to pass through that attacked you.

Ultima VIII Pagan had an area with young children playing in the woods, with some toys lying around, that would rush and attack you.

Ultima IX had one part where a child would pester you for money and would throw a fireball at you if you refused. You would be forced to kill him. 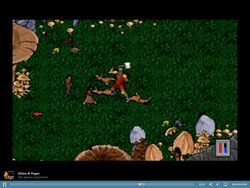