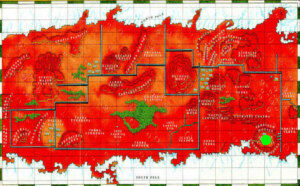 Argyre is an old martian city on the Mars of the late 19th century, located at 30S 107W.

It was the city where the evil Raxachk gained power and then tried to subject all of Mars. That however failed, resulting in him releasing a deadly plague. Many centuries later, Raxachk managed to lure Rasputin to Argyre and take over his body. Together with willing human accomplices, they turned the city into a fortress.

The Avatar had to force entry with a barge-mounted cannon in Martian Dreams to get the pigments for Chsheket's body covering. However, Raxachk at that time was effectively unreachable in the real world. Returning later, Raxachk had fled Rasputin's body, killing most of the others. The local Dream Machine was then used to confront him a final time.